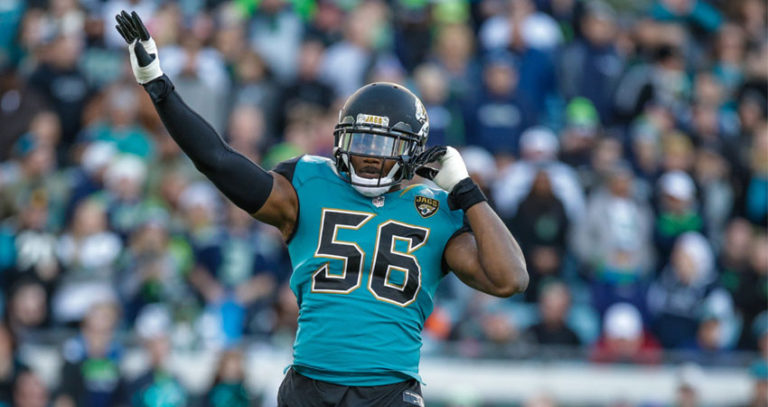 The 2022 Dallas Cowboys will be Dante Fowler’s fourth NFL team in eight seasons. The move represents a fresh start on the field, but the defensive end is still paying- quite literally- for trouble caused at the first stop in his pro journey.

A civil jury in Florida has ordered Fowler to pay $280,000 in compensatory and punitive damages to a St. Petersburg man he attacked after a traffic accident near-miss in 2017. The story was reported Thursday by Michael Gehlken of the Dallas Morning News.

The original arrest report contends that, after failing to come to a full stop at an intersection, Fowler nearly hit another vehicle. A resident of a nearby apartment complex who witnessed the close call shouted something to Fowler. The Jaguars defender- then entering his third season- got out of his vehicle and struck the 55-year-old bystander, stepped on his eyeglasses, and threw his grocery bag into a lake.

Fowler apologized publicly when Jaguars training camp got underway about a week after the incident, saying, “I just wanted to let people know and everybody know that’s not me as a person. I’m a better person than that, and it won’t happen again.”

The victim claimed he “suffered a torn rotator cuff and exacerbation of cervical spine injuries, among other injuries” from being knocked to the ground by the former first-round draft pick.

The ex-Gator pleaded no contest in 2018 to misdemeanor battery, criminal mischief, and petty theft in the matter. He was suspended for the 2018 Jaguars season opener.

Even with this week’s ruling by a jury after a four-day trial in St. Petersburg, Fowler is not in line for any further punishment from the NFL in the case.

The 27-year-old’s recent deal with Dallas reunites him with Cowboys defensive coordinator Dan Quinn, his DC for one season at Florida and his head coach for part of a season in Atlanta.

Fowler said after his signing that Quinn “knows the ins and outs of me as a football player. I know he’s going to get the best from me.”