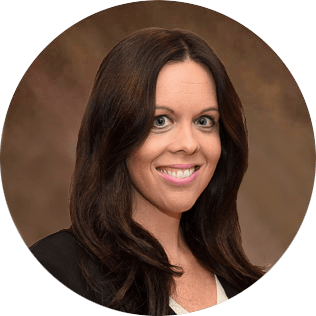 Brook C.
Caitlin Szematowicz is a superb litigator. She helped me with my case and was able to settle for an amount that was higher then I had hoped. Her approach was clear and concise. Caitlin kept me informed at all times, and she was always available. She was efficient in handling my case and did not create work to drive up my cost. I wish I would have met Caitlin early on in my litigation path. I had 2 other lawyers, and Caitlin is by far the best. I highly recommend Caitlin Szematowicz without reservation.

Caitlin Szematowicz is a Partner with the firm, practicing in the areas of Civil & Commercial Litigation, Appeals, and Employment Law. Caitlin joined the firm in August 2012.

While in law school, Caitlin worked as an appellate law clerk for a Washington D.C. law firm, extern at the United States Attorney’s Office, and a Certified Legal Intern at the State Attorney’s Office. She graduated law school with a Pro Bono Certificate due to her pro bono work as a research associate for the Florida Innocence Commission and was recognized in the Florida Innocence Commission’s Final Report to the Supreme Court of Florida for her extensive legal research.

Caitlin is recognized as a Super Lawyers “Rising Star” and was named a Rising Star in 2018 and 2019.

She is a Past President of the Pinellas County Trial Lawyers Association and also served three years on the Barney Masterson American Inn of Court Executive Committee. She was selected as a speaker for the Florida Bar’s Practicing with Professionalism CLE in both 2014 and 2016.

Caitlin has also chaired numerous events for the St. Petersburg Bar, including chairing the Pillars of Justice, Law Day, Oktoberfest, and Celebration of the Foundation events. She also previously co-authored a legal column for The Island Reporter, “The Premier Paper of the South Gulf Beaches.”

Caitlin Enjoys Volunteering in the Tampa Bay Area. For her community involvement, she was the recipient of the Barney Masterson American Inn of Court’s Thomas E. Penick, Jr. “The Rock” Award in 2014, an award which is given to a lawyer with less than five years of practice who has provided exceptional service to the community.