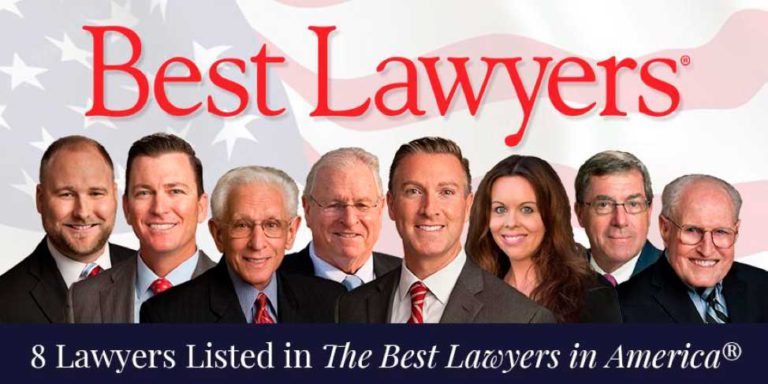 Each attorney has been chosen for professional excellence in the 2023 edition of The Best Lawyers in America® for work in specialized areas. Earning this title is one of the highest honors an attorney can earn.

The Best Lawyers in America®, “The Best at What We Do”

Best Lawyers is a company founded on the principle that “the best lawyers know who the best lawyers are.” They have broadcasted respected peer-review publications in the legal field for over four decades.

To be recognized by Best Lawyers is one of the most highly esteemed and widely regarded titles by clients and professionals in the legal community. The publications of Best Lawyers are known for their reliable and unbiased legal recommendations.

They compile a list of the most outstanding lawyers through a rigorous peer-review survey process, which includes tens of thousands of confidential evaluations from lawyers—only the top lawyers who receive enough votes and approval of Best Lawyers to earn this acclaimed title.

Furthermore, Best Lawyers in America® is a company proudly committed to diversity, equity, and inclusion. They actively focus on creating and running a company that advocates for cultural programs and diversity.

Howard is a respected member of the Florida Bar, with over 50 years of membership. In addition, he’s a member of the American Bar Association.

Howard is a legal expert dedicated to professional excellence in Business Litigation and Civil Litigation. He’s devoted his career to a broad range of business litigation and business transaction law, including:

Thanks to Howard’s extensive experience, he can quickly and effectively analyze complex litigation and transactional/relationship matters. Another unique strength is his ability to determine the course of action that is in the client’s best interests. He is known for his strategic work in the transactional/relationship area because he is sensitive to preventive law measures. With his understanding of planning and avoiding future disputes, he can create resolutions and make future disputes less difficult and stressful.

Howard is Board Certified in Business Litigation Law and in Civil Trial Law. In addition, Howard is a former arbitrator and former member of the American Arbitration Association’s National Commercial Roster of Neutrals. Howard is a member of The Large, Complex Commercial Case Panel and the M&A and Joint Venture Panel.

In addition to achieving the Best Lawyers in America Award, Howard is recognized as a Florida Super Lawyer, has a Martindale-Hubbell AV Preeminent rating, and is a Recipient of the Albert Nelson Marquis Lifetime Achievement Award. He’s also achieved the following awards: Martindale-Hubbell Top Rated Lawyer in Real Estate Law, Lawyers of Distinction, America’s Most Honored Professionals, and has an AVVO 10 rating.

Sean K. McQuaid is recognized in the 2023 edition of Best Lawyers for his practice of Plaintiff’s Personal Injury Litigation.

Sean was also the President of the St. Petersburg Bar Association for 2020-2021.

Since joining the firm in 2000, he has been the fastest rising lawyer in the firm’s history. Sean joined the firm as an associate in 2000, became a shareholder in 2006, and became a named partner in 2013. Now, he is the President of the firm.

His personal injury practice is one of the top in the Tampa Bay area. He consistently receives 5-star reviews from satisfied clients who speak highly of his work.

Sean began his legal studies at Stetson University College of Law in 1997, graduating with his Juris Doctor and Masters in Business Administration degrees. During law school, he was a member of the Moot Court Board and competed across the country.

Sean’s diverse experiences as a leader and an athlete contribute to his straightforward and competitive approach to practicing law. He is committed to excellence and determined to win.

Aubrey graduated from Emory University with a degree in Economics and attended Stetson Law School from 1971-1974. Afterward, he partnered with Anthony S. Battaglia and Howard P. Ross.

His almost 50 years of litigation experience has involved everything from personal injury and criminal defense to civil and commercial litigation. Aubrey has represented clients and won multi-million dollar claims. In addition, he’s represented government agencies, including the Pinellas County Sheriff’s Department.

Best Lawyers in America is just one of many accolades Aubrey has earned. He’s also been a Florida Super Lawyer for several years and maintains a Martindale-Hubbell AV preeminent highest rating.

In addition to his myriad of awards and honors, he is highly respected for his involvement and commitment to the local legal community. He is a previous President of the St. Petersburg Bar Association and former President of the Pinellas County Criminal Defense Lawyers’ Association. He also served as a founding member of the Board of Directors of the Florida Association of Criminal Defense Lawyers.

Aubrey also served as the Master of the Bench with the American Inns of Court, Pinellas County Chapter, and Barney Masterson Inn of Court. Furthermore, he received “The Barney” for his professionalism, civility, ethics, and legal excellence.

Aubrey is dedicated not only to serving in the legal field but to his local community as well. In addition to all of his professional and community legal services, Aubrey also has:

Jonathon Douglas is recognized in the 2023 edition of Best Lawyers for his practice in Insurance Law, Insurance Litigation, and Plaintiff’s Personal Injury Litigation.

Jonathon prioritizes fighting for the rights of his clients. He’s distinguished for his compassionate approach to all his clients and knows their recovery and well-being are paramount.

Jonathon attended the University of Florida, earning his BA and BS, both with honors. He then went on to attend Stetson University College of Law. There, Jonathon learned and practiced the art of trial advocacy. He also clerked for the Honorable Shawn Crane and interned at the State Attorney’s Office and Public Defender’s Office during his time at Stetson.

Following his graduation, Jonathan went on to work as Assistant Public Defender for the Sixth Judicial Circuit. Then he moved on to defending the rights of the accused in State and Federal Courts as an associate with the Hebert Law Group. From there, he worked as a Civil Trial Litigator and partner with Goodis, Thompson & Miller representing some of the largest insurers in Florida.

Jonathon uses his inside knowledge of insurance practices to help policyholders hold insurance companies accountable. He knows how to win a successful insurance claim.

Caitlin Szematowicz is a Partner at Battaglia, Ross, Dicus & McQuaid, P.A. She has been practicing Civil & Commercial Litigation, Appeals, and Employment Law with the firm since August 2012.

She is not only distinguished for her professional excellence but also known for her active involvement in the legal community. The Best Lawyers in America® is just one of Caitlin’s many accolades. She has also been recognized as a “Rising Star” Florida Super Lawyer for five consecutive years (2018-2022) and was named Florida Trend Legal Elite in 2022.

While she dedicates her career work to the service of others, Caitlin has successfully built an impressive extracurricular portfolio involving numerous leadership positions. She currently serves as the Past President of the Barney Masterson American Inn of Court. In addition, Caitlin has previously served as the President of the St. Petersburg Bar Foundation and Past President of the Pinellas County Trial Lawyers Association. She was also a member of the Board of Trustees for the St. Petersburg Bar Foundation for six years.

Caitlin has served on the St. Petersburg Bar Foundation’s annual professionalism seminar committee and is appointed to the Sixth Judicial Circuit’s Professionalism Committee. She was also selected twice as a speaker for the Florida Bar Practicing with Professionalism CLE.

Her peers chose her as a recipient of the Barney Masterson American Inn of Court’s Thomas E. Penick, Jr. “The Rock” Award for her exceptional service to the community.

Andrew R. Pardun was recognized in the 2023 edition of Best Lawyers for Real Estate Law.

He is currently a partner with the firm. He specializes in the following areas: Commercial & Residential Title Insurance, Commercial and Residential Real Estate Closings, and Business Law.

Andrew received his Juris Doctorate Degree at Stetson University College of Law and his MBA with honors. He completed his MBA with a perfect 4.0 GPA and was a member of the Beta Gamma Sigma Business Honors Society.

In addition, Andrew completed his Master of Laws Degree in Taxation at Villanova University. Before that, he attended the University of South Florida for his undergraduate studies, majoring in Finance. He also served as the President of the Sigma Chi Fraternity and Vice President of the Interfraternity Council.

Andrew’s has been recognized him in the legal community with a perfect 10/10 ranking from AVVO. He’s also a Super Lawyer’s Rising Star, one of the most distinct honors available to Florida attorneys.

Andrew is comfortable in leadership positions and has continuously held them throughout his life. After college, Andrew gained experience working in the financial services industry and co-owned a real estate investment firm in Tampa.

Mayor Rick Kriseman recently appointed Andrew to the City of St. Petersburg’s Nuisance Abatement Board. He is also an active member of the Attorneys’ Title Fund, Pinellas Realtors Organization, and The Barney Masterson’s American Inn of Court.

Bruce Marger is recognized in the 2023 edition of Best Lawyers for his practice in Litigation and Practice in Trusts and Estates.

After graduating from Miami Senior High, he completed his higher education studies at the University of North Carolina and Harvard Law School. Bruce double-majored in Political Science and Accounting. While at UNC, he was also chair of the Debate Council and a member of Phi Beta Kappa and Beta Gamma Sigma. Then, while at Harvard, he concentrated his studies on tax and estate planning.

He is currently an active member of the Florida Bar. In addition, he serves as Chair of the Judicial Poll Committee and Chair of the Real property, Probate, and Trust Law Section. He also contributed to developing the board certification in Wills, Trust and Estates law. Furthermore, Bruce is a Fellow of the American College of Trust and Estate Counsel (ACTEC).

A respected veteran, Bruce served in the US Air Force and Air Force Reserves for 15 years before practicing law. He earned a rank as a Major before leaving the service to practice law full-time. He is married to his college sweetheart, Mary Ann, and they have three children.

Robert Kapusta, Jr. is recognized in the 2023 edition of Best Lawyers for his practice in Real Estate Law.

Robert’s expertise in Real Estate Law is varied and extensive; he practices in the following areas: Mergers and Acquisitions, Tax and Estate Planning, and Business and Corporate Law.

Prior to practicing with Battaglia, Ross, Dicus & McQuaid, P.A., Robert practiced with Fisher & Sauls. He received his Bachelor’s degree from Cornell University, Juris Doctor degree from Stetson University College of Law, and Master of Laws (LLM) degree in taxation from the University of Florida College of Law.

Robert is also a Certified Public Accountant and is admitted to practice in all Florida courts.

While not practicing law, Robert volunteers his time and talents to local community organizations. He is passionate about helping local businesses grow. As such, he also helps foster the growth of economic vitality, arts education and appreciation, and capital school improvements.

Additionally, Robert dedicates himself to expanding educational programming opportunities in St. Petersburg. He does so through various leadership positions and civic activities. Aside from his awards as an outstanding legal professional, he’s also won the following awards:

The firm would like to congratulate all 8 attorneys on achieving The Best Lawyers in America® award. This would not have been without such wonderful and loyal clients. The goal of each of our lawyers is to put the client’s best interest first.