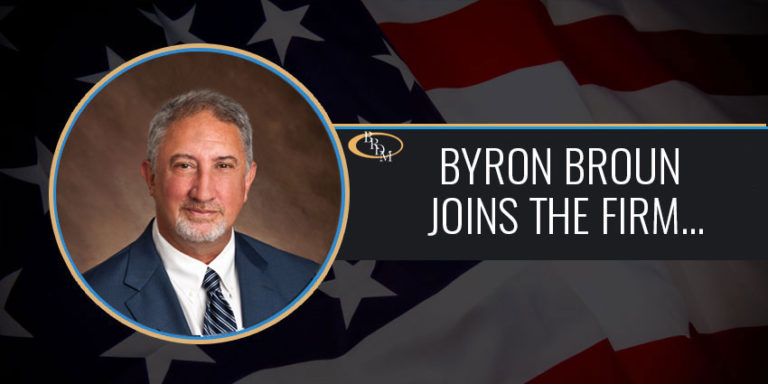 Battaglia, Ross, Dicus & McQuaid, P.A. is pleased to announce that Byron Broun has joined the firm. We look forward to having Mr. Broun at the firm representing clients with personal injury cases. The firm would like to extend a warm and genuine welcome to Mr. Broun.

Mr. Broun is a seasoned attorney with over 30 years of experience in various areas of law. Byron is passionate about giving victims a voice in the legal system and an avid fighter for justice.

His career experiences are cast with integrity and honor, and some even consider him the Robin Hood of Social Security disability and personal injury.

During his formative advocacy years, Mr. Broun learned about unfair insurance companies and political practices that occur at the expense of Florida’s working class. Fed up with the injustices and corruption, Mr. Broun felt called to take matters into his own hands and start a private practice. In 2010, he opened his own practice, which specialized in personal injury cases and Social Security disability claims.

With his home base in downtown St. Petersburg, Byron Broun served clients all across the greater Tampa Bay area, from Tarpon Springs to north Pinellas County and Pasco County, to Tampa and even Sarasota.

Mr. Broun began his career following law school as an attorney-adviser for the Federal Emergency Management Agency (FEMA), assisting victims of Hurricane Andrew in South Florida as well as Citrus County victims of “the Storm of the Century” that struck the Gulf Coast of Florida and continued to slam states to the North.

Byron then went on to work with John G. Thompson and Associates in Tarpon Springs, where he began handling Social Security disability and workers’ compensation claims and personal injury cases. After that, Byron worked with John H. Thompson in St. Petersburg, where he continued practicing Social Security, personal injury, and workers compensation law.

A New York native, Byron Broun moved to St. Petersburg in 1978 to attend Eckerd College. After obtaining a B.A. in Political Science in1982, Byron went on to work various jobs before landing in the healthcare sector, where he worked for the Florida Department of Health and Rehabilitative Services (HRS) as a Public Assistance Specialist. After that, Mr. Broun moved to Miami, where he obtained his law degree from the St. Thomas University of Law in Miami in 1992.

Attorney Broun now considers himself a true Floridian, having lived in several areas, including St. Petersburg, Tarpon Springs, Jensen Beach, Stuart, Palm Beach Gardens, and Miami Beach. Mr. Broun’s intriguing and varied work experience is a true testament to the notion that diversity is the spice of life.

Before becoming an attorney, he worked as a laborer for a fiberglass spa manufacturing company, a dishwasher, a waiter, an entertainment booking agent, and a deckhand on a private yacht. He also loves traveling and has been immersed in numerous cultures and destinations worldwide.

Byron’s globetrotting spirit paired with such a diverse work experience makes him a well-rounded, sophisticated individual. It allows him to connect with many of his clients on a very personal level. Mr. Broun takes pride in his ability to bring compassion, understanding, and empathy to all of his clients.

In December of 2021, Byron Broun was invited to assist attorneys Sean K. McQuaid and Jonathan Douglas in litigating a high-profile personal injury case in Tampa, Florida. It was then that Mr. Broun caught a glimpse of the adrenaline rush that came from working with two brilliant, young, and aggressive attorneys. That exhilarating trial experience inspired Byron to close his practice and join forces with Battaglia, Ross, Dicus & McQuaid.

As a result, Mr. Broun will now bring his multi-faced skills and knowledge of over three decades to exclusively practice personal injury at the firm.

In addition, his unique experience in handling cases involving complex medical issues makes him an invaluable asset to the team at Battaglia, Ross, Dicus & McQuaid.

Mr. Broun currently lives in St. Petersburg with his two dogs. He enjoys the beach, travel, boating, and the Tampa Bay Buccaneers.