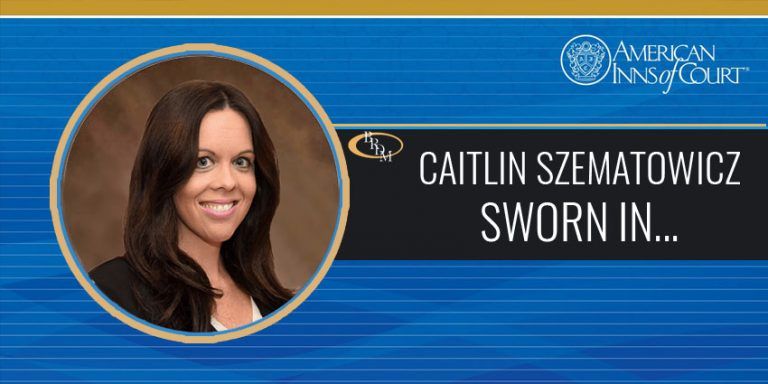 Partner Caitlin Szematowicz of Battaglia, Ross, Dicus & McQuaid, P.A. was recently sworn in as the Executive Director of the Barney Masterson American Inn of Court for the 2020-2021 year. This is Caitlin’s fourth year serving on the Executive Committee of the Barney Masterson American Inn of Court. The Inn serves the Florida’s Sixth Judicial Circuit, Second District Court of Appeals, and United States District Court Middle District of Florida (Tampa Division). American Inns of Court are an association of lawyers, judges, and legal professionals who share a passion for professional excellence. Inn members provide mentoring opportunities, discuss professionalism, and advance integrity, ethics and civility.

The Foundation funds projects which:

During Caitlin’s tenure with the St. Petersburg Bar Foundation, she served as President, Immediate Past President, President-Elect, and Treasurer. She also chaired numerous events for the Foundation. These events include the Pillars of Justice event, Oktoberfest event, and Celebration of our Foundation event, among others. She also participated in the St. Petersburg Bar Association and Foundation’s Annual Law Day Event for several years. She has served on the Foundation’s annual Professionalism CLE committee for several years and continues to serve on the Foundation’s annual Professionalism CLE committee.

Caitlin has been with Battaglia, Ross, Dicus & McQuaid, P.A. for eight years, and she is dedicated to community service. Congratulations to Partner Caitlin Szematowicz on these accomplishments!