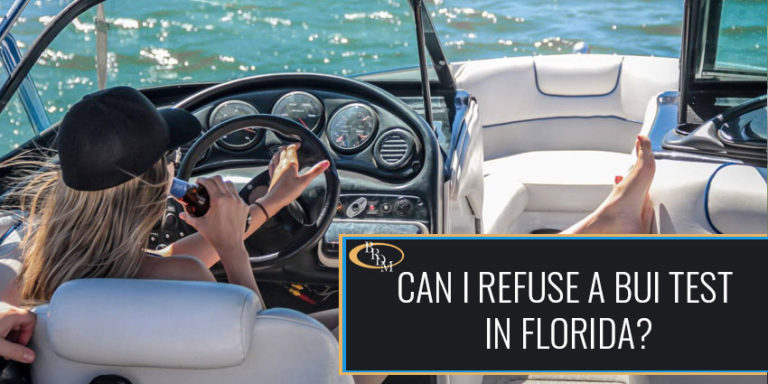 Home » Blog » Can I Refuse a BUI Test in Florida?

Law enforcement officers cannot force you to perform a breathalyzer test, but if you refuse a BUI test in Florida, you will face consequences.

As a boat operator, you may be stopped if the arresting officer suspects that you’re operating the vessel under the influence of drugs or alcohol. After you’ve been arrested, the law enforcement officer may request a BUI test.

What Happens If You Refuse a BUI Test in Florida?

BUI tests may come in the form of breath, blood or urine but are most commonly breathalyzers. The goal is to determine your BAC level (Blood alcohol concentration).

You have the right to refuse the test. However, there will be consequences.

How to Contest a BUI Test Refusal Fine:

If you wish to contest a civil penalty following the refusal of a BUI test in Florida, you must:

The judge for the criminal case will also preside over the administrative hearing for the civil penalty. Hiring a reputable and respected local criminal defense attorney will be advantageous. Our attorneys, for example, have a strong reputation and relationship with the local judges.

Note: Most BUI arrests are made by law enforcement officers with the Florida Fish and Wildlife commissions. However, any local agency may be able to make an arrest for a BUI offense.

Should You Refuse a BUI Test in Florida?

Providing a BUI test result that displays a BAC of 0.08 or more is evidence that you have committed a BUI crime.

For that reason, it may be considered beneficial to refuse the BUI breath test if you believe your BAC is over 0.08. We recommend not to take the intoxilyzer because you will not lose your driver’s license and you will only get a $500 fine. We view this as a small price to pay to avoid giving the State evidence of impairment. When in doubt, refuse.

There may also be reasons for refusing a BUI test in Florida, such as:

What Is a BUI in Florida?

Florida Statute 327.35 defines a BUI offense (Boating Under the Influence) as:

Defending a BUI Case in Florida

If you’ve been arrested for a BUI in Florida or a BUI test refusal in Florida, you should contact a criminal defense attorney as soon as possible. Our attorneys provide free consultation and welcome you to call us today.

Although the penalties are not as severe as a DUI, you may face jail time and expensive fines.

Thankfully, our attorneys have defended many BUI cases either by getting the charges dropped or by reducing the penalties.

BUI arrests are not usually handled by police officers, and that can lead to a lot of mistakes. We see this a lot with officers from Fish & Wildlife (FWC).

For example, we’ve seen cases where officers request field sobriety tests while the defendant is still on the boat rocking the water! There’s also various reasons why boats may look like they’re being operated like a drunk driver. Wind, engine noise, currents and sea-sickness are just a few examples.

Our BUI defense lawyers may be able to get your charges dropped by arguing defenses such as these. There is still hope; contact us today.

Penalties for a BUI in Florida: First Time Offense

If convicted for a BUI in Florida, you will face a criminal record and the following penalties:

However, if the BUI case involved the following criteria, then the consequences may be more severe:

Read Related: How Does a DUI in Florida Affect My Job Or My Future?

If you’ve been arrested for BUI in Florida, then our criminal defense attorneys can help. We specialize in BUI charges in Pinellas County so that we know everyone and what to expect.

We regularly help people like you to clear their name from unjust charges or minimize the impact on their life.

Sean McQuaid is a top-rated criminal defense attorney in Pinellas County. He is the president at Battaglia, Ross, Dicus & McQuaid, P.A., one of Tampa Bay’s most prestigious law firms with the reputation and connections to make things happen.

With decades of experience helping people like you, we believe there is no better place to help you fight a BUI arrest.