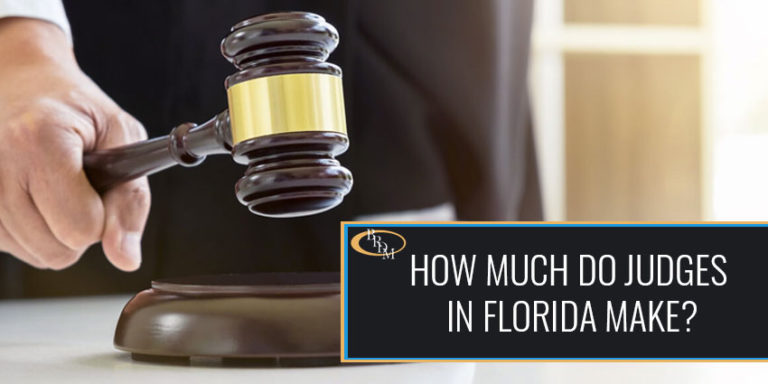 Home » Blog » How Much Do Judges in Florida Make?

Ever wonder what the judge who is deciding your case makes per year? Does knowing their salary change how you handle your case? Does it change how you present financial information or even how your own wealth will be viewed? The salary of a judge is public record in the state of Florida, yet I have observed that not even my lawyer colleagues truly know how much judges make. I guarantee that if you asked ten lawyers what the salaries of judges are, nine of them would have no clue. Historically, lawyers do not become judges to get rich, but the salary increases in this year’s budget are healthy. It is a big deal and could reshape the makeup of the judiciary. In the meantime, there should be a lot of happy judges on the bench.

On July 1, 2022, all judges in Florida received a raise. Circuit court judges now make $182,060 and county court judges earn $172,015. Supreme Court justices now make $239,442 and district court of appeal judges receive $202,440 per year. These raises represent a 10% increase in salary and were a top priority for Justice Charles Canady in the State’s court budget. Raises this large are rare and significant.

Why Does the Salary of Florida Judges Matter to You?

Beside rewarding our existing judges, the large salary increases are designed to entice higher quality lawyers to serve on the bench. There has been an overwhelming trend in recent years that the majority of judicial applicants are government lawyers such as assistant state attorneys or public defenders. I saw this first hand when I served on the Judicial Nominating Commission. For a government worker, the pay increase and autonomy is life changing. Many government lawyers get a pay raise between 50-100% overnight by becoming a judge. When you add in the control over your own schedule and the prestige that comes with wearing the black robe, it is easy to understand why this trend has continued.

For the public, is it healthy to have so many former government lawyers on the bench? For the lawyers who practice in front of these judges, would you not want more judges to have experienced the interaction between a paying client and a lawyer? This is not to say that former government lawyers are not good judges. In fact, they are normally superior trial judges. They have more trial experience than most private practice lawyers. But, having a variety of experience on the bench can only serve to strengthen the judiciary.

The hope is that with these new pay increases, more lawyers in private practice will be enticed to join the bench. The sad reality is that before these pay increases, the top private practice lawyers would have had to take a pay cut to serve as a judge. When you are accustomed to a certain income, it is hard to go backwards. It is also extremely hard to run for judge when you have a private practice caseload. I saw it first hand when my law partner ran for judge. He had to take a break from practicing law for two years because he did not have the time to devote to his clients. Had our firm not been there to support him financially, he could have never done it. I don’t know how a solo practitioner or a lawyer from a small firm finds the time to dedicate to a campaign. But maybe the reward of these salary increases will make the risk of a campaign more attractive to the top lawyers. It may even entice older, successful lawyers to transition to the bench before they retire. The health, vacation and retirement benefits for judges is second to none.

How Long Until the Salary Increases Start Changing the Bench?

My prediction is that as soon as the economy declines, we will see many more private practice lawyers trying to become judges. The reality is that as long as the economy is good, lawyers in private practice are making too much money to become judges. If and when the financial pressure on private lawyers increases, I believe that things will change. Many lawyers who have been contemplating the move over the last few years will likely decide that the conditions are now ripe for a change. But, we shall see. If the judicial salary raises do nothing other than incentivize more government lawyers to apply, then the whole idea was a failure. Only time will tell.