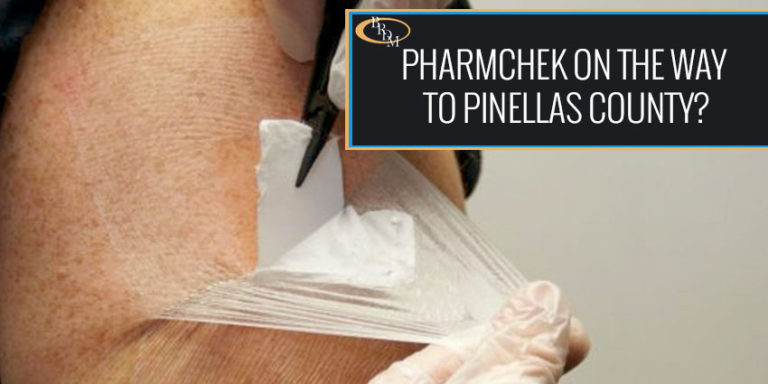 PharmChek is a sweat patch that is used for long-term and continuous drug testing. Courts in Pinellas County are now considering adding the PharmChek method of testing as an alternative to the Continuous Ankle Monitor (CAM) and random urine testing.

Read on to find out how PharmChek works, the benefits, potential issues, how it compares, and to ankle monitoring and urine testing. We will also discuss the implications for future PharmChek use in Pinellas County courts and probation.

PharmChek® is a drug-detecting sweat patch. It can detect:

The patch can be worn on the skin for up to 10 days. It uses the person’s sweat as its sample source for drug detection during that time.

PharmChek® not only acts as a deterrent to drug use but has several other advantages such as:

How Does the Sweat Patch Work?

The PharmChek® sweat patch works by capturing perspiration from the skin. The body excretes approximately 300-700ml of insensible sweat each day. PharmChek sweat patch is an absorbent pad with the capacity to absorb about 2ml per week.

The patch has a polyurethane film that acts as a semipermeable membrane, allowing small molecules to pass through the patch. This lets the skin breathe and stay sterile. However, while the patch allows small molecules like oxygen, carbon dioxide, and water vapor to pass, it traps large molecules. Thus, drug excretions will get trapped in the pad and be visible during lab analysis. In addition, the special membrane allows the user to wear the patch while swimming, bathing, or playing sports.

The patch is designed to be worn a minimum of one day and a maximum of 14 days before requiring a new one. Then, the patch gets sent to a lab for testing. The sample will undergo a screening test and a quality assurance review at the lab. First, the patch will undergo a bench-level screening. Then, a certification scientist reviews the results and conducts a final quality assurance review. If the scientist finds any discrepancies, the sample returns to the lab for re-testing.

Results are delivered online within 1-3 days.

Potential Issues With the Sweat Patch

Evidence of Tampering With Patches Is Obvious

According to a National Library of Medicine study suggests low dependability on patients with sweat patch testing.

The study found that only 54.3% (188 out of 536) of patients returned with the patch attached to their skin. However, this conclusion may have different implications for a defendant who has more at stake from tampering with the patch (rather than a patient in a clinical setting. Basically, if you try to alter or tamper the sweat patch in any way, this will be evident. Consequently, your patch will not be accepted as a valid means for screening.

Another study by the US Department of Justice reported findings that question the reliability of sweat patch results. The study notes that the current design of sweat patches could produce false positive results under certain conditions.

That’s because the patch could become contaminated from the presence of drugs on the skin’s exterior. Furthermore, any substances not removed by cleaning the skin could cause external contamination under the patch.

In addition, if an administrator applies the patch to a body part with hair or other obstructions to the adhesive, that can compromise the accuracy of sample collection.

Bottom line is to make sure your skin is cleaned and prepped correctly before applying the patch. Additionally, any attempt to tamper with the patch could potentially result in a false positive from external contamination.

How Does Parmcheck Compare to Ankle Monitoring Devices and Using Testing Methods?

Using a sweat patch would be an offender-paid program, like the ankle monitoring program. However, depending on the case circumstances, the sweat patch could be a more effective and affordable option for defendants.

What is a CAM (Continuous Ankle Monitor)?

A Continuous Ankle Monitor is a court-ordered device worn on the ankle. The court will order the offender to wear the ankle monitor for a set period as a term of probation or parole. Courts use ankle devices as an alternative to harsher penalties like incarceration.

In Florida, we often refer to ankle monitoring as community control. The Florida Department of Corrections supervises court-ordered GPS monitors and alcohol monitors.

While the most common uses for ankle monitors are DUI cases, courts sometimes use them for drug crimes, domestic violence, or other probation or parole instances. Defendants must wear them 24/7 and are not allowed to tamper with them. Tampering with the device usually leads to consequences, like jail time.

Some have argued that the rules and restrictions with ankle monitors set them up for failure. For example, the devices are sensitive to contamination from all sorts of chemicals. Hand sanitizer and cleaning products are constant risks for false positives.

Ankle monitors can also be very pricey and consequently unaffordable. For example, there is usually a fee for installation (generally about $100 or more). Then, on top of that, they pay a daily monitoring fee of $10. That means monthly costs that continue to pile on.

In addition to the usage regulations and high costs, ankle monitors have another significant limitation. Unlike the sweat patch, there are no ankle divides that can detect drugs. They are only able to detect GPS location and alcohol.

The Pros and Cons of Urine Testing

Yet another method of drug testing in criminal cases is random urine testing. Urine testing has pros and cons, like ankle devices and sweat patches.

PharmChek has been upheld as a valid drug screening method in over 50 state and Federal Courts, including the 8th Circuit Court of Appeals.

According to the Florida Safety Council, the Courts in the First Judicial Circuit have been using drug patches since December 2011. In addition, Judges of Duval and St. Johns County have also approved the use of patches for drug testing.

If you are facing criminal charges in Pinellas County, you will likely have questions about the potential penalties that you face. These patches are new and will be highly scrutinized. There will likely be many defenses that can be employed. Contact us today for a free, no-obligation consultation.