Reflections on “OJ: Made in America” from a Criminal Defense Lawyer 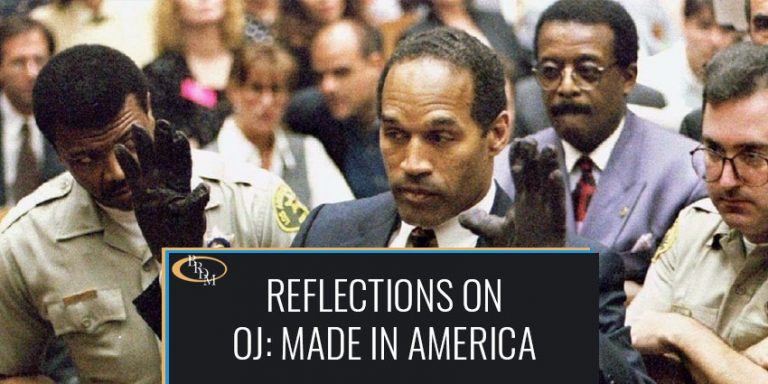 Home » Blog » Reflections on “OJ: Made in America” from a Criminal Defense Lawyer

I recently watched the five-part documentary, “OJ: Made in America”, on ESPN and felt compelled to comment on it.  Was I the only one disappointed by the behavior of the lawyers during the course of the trial?  Notwithstanding the outcome and the evidence, I asked myself, “Is this how our criminal justice system really works?”

I was still in college when the trial occurred, but now that I am a criminal defense lawyer, I have a whole new perspective on what transpired. Although captivating, I couldn’t help but wonder what the general public must think about the integrity of criminal trial lawyers after watching.  Throughout the show, OJ’s lawyers bragged about how they won the case, including changing out photos of him with white people to those of him with black people before the jury visited his house. This was done in order to relate OJ to the mostly black jury.  Likewise, the lawyers chuckled about how they wore ties with African patterns also to “relate” to the black jurors.  Perhaps most shocking was the admission by OJ’s agent that OJ stopped taking his arthritis medicine two weeks before he tried on the gloves in order to make his hands swell.  Furthermore, the lawyers blatantly acknowledged using race as an issue in the case in order to exploit the bias of the community against the police.  The lawyers went so far as to call the key detective a “genocidal racist” and even compared him to Hitler in the closing argument.

While the prosecutors berated the tactics employed by the defense lawyers, their behavior was no better.  After the mostly black jury was seated, they brought in a black prosecutor the day before the trial was to begin specifically to pander to those jurors.

I asked myself whether the behavior by the lawyers in OJ’s case was normal.  Sadly, the lawyers’ cavalier attitudes about manipulation of evidence and playing the “race card” caused me to conclude that this behavior was par for the course in that trial and acceptable in their eyes.

In criminal trials, we hold law enforcement officers to a high standard and are quick to point out their flaws.  We scrutinize them if their mentality reflects that the end justifies the means.  But, when the defense lawyers and prosecutors alike fail to meet the high moral standards we expect, is there not a flaw in the system?

After reflecting on this issue, I believe that our criminal justice system really does have a process of checks and balances so that the behavior seen in the OJ trial does not persist.  When a lawyer is found to have deviated from moral standards, it is the responsibility of the judge and opposing counsel to curtail that behavior.  For example, if a criminal defense lawyer is “gaming” the system, the prosecutor’s office and the judiciary must create consequences not only in that case, but in all of the lawyer’s future cases.  As a lawyer, all one has is his/her reputation, and I cannot imagine how a lawyer who admits to manipulating evidence like those in the OJ trial could ever get a break from a prosecutor or a judge in future cases.  Perhaps because of the publicity of the OJ case and the fact that several lawyers were brought to Los Angeles from around the country, they were not concerned about the consequences of their behavior.  But, here in Tampa Bay, lawyers are not celebrated for immoral behavior.  We earn our reputation by zealously advocating for our clients within the rules, not by breaking the rules, and that is the way the judicial system is designed to work properly.